(Surprising) Facts About 10 of The Best Business Travel Destinations

The great thing about international business trips is the opportunity to learn about new cultures and customs. The top 10 business travel destinations selected below are hubs of commerce, transportation, and innovation, and they always have something to interest and surprise business travellers. Here are some destination facts for business travel to these fascinating cities.

New York has more millionaires than any other city in the world. There are more than 980,000 millionaires in the Big Apple. A 2017 report by Wealth-X report found that a staggering 8,865 millionaires are classed as ultra-high-net-worth individuals (UHNWI), meaning that they’re worth over $30 million. The streets aren’t paved with gold but they could be considering 25% of the world’s gold bullion is stored in the vaults of the Federal Bank Reserve.

Japan has the world’s oldest population and 20% of Tokyo’s residents are over the age of 70. Japanese culture is rooted in respect for seniority and a sense of duty in caring for the elderly. All citizens aged 40 or above pay mandatory social care premiums. There’s even a shopping district, Jizo Street, with more than 200 shops dedicated to Japan’s ageing population. It’s named after a Togenuki Jizo, a deity believed to heal ailments and there’s a temple where people can pray for their well-being.

When you next visit the City of Light for business, make time to sample some of the best food in the world. It might just help you bond with your colleagues and clients! French gastronomy was awarded UNESCO World Heritage status in 2010 in recognition of its role in strengthening social bonds. French cuisine is ‘a social custom aimed at celebrating the most important moments in the lives of individuals and groups’.

Hong Kong is undoubtedly one of the world’s best business destinations, but that doesn’t stop businesses from taking Feng Shui very seriously. Feng Shui masters employ the mystical art to create a harmonious flow of energy throughout business headquarters. They consult owners and designers on everything from how to decorate to where to put the entrance to a new building. The HSBC Hong Kong building includes two rods to deflect bad energy coming from the sharp-edged Bank of China building opposite it.

The Fairmont Royal York Hotel is the most famous hotel in Toronto. The 28-storey building was considered the tallest building in the British Empire when it opened in 1929. It’s welcomed more than 40 million guests including royalty and numerous business travellers. The hotel has 34 conference rooms and 1,365 guestrooms, including 191 suites that have work desks with multiple power points.

While you’re doing business in Dubai, you might have a blink-and-you’ll-miss-it experience on Dubai’s streets. The police have a fleet of supercars including Lamborghinis, Ferraris, and Bentleys, McLarens and a Bugatti. The Dubai police are quite good at defying expectations with the things they own and also have their own bagpipe band, which performs at state events. Despite bagpipes’ association with Scotland, the origins of the instrument dates back to Persia in 900 AD.

Berlin has always been the home of the startup and many big-name tech firms were founded in the city. Compared to other major European cities, it’s incredibly cost-effective with affordable offices and co-working spaces. But with all the investment of the past decade, apartment rents have skyrocketed and city authorities enacted a rent cap in 2015. Since approximately 85% of Berlin residents are renters, some Berliners are calling for more protection.

Chicago has a long history of enterprise and innovation. In 1893, the World’s Columbian Exposition took place to celebrate the 400th anniversary of Christopher Columbus's arrival in the New World. The five-month event attracted nearly 26 million visitors and proved to be a huge influence on the city’s architecture and culture. It launched an impressive range of inventions and items including the zipper, Wrigley’s Juicy Fruit gum, the Ferris Wheel, and spray paint.

Shanghai is one of the world’s best business destinations for many reasons, not least its fantastic transportation system. It has the longest metro system in the world, which covers 400 miles of track beneath the city and 393 stations. It’s easy to navigate for non-Mandarin speakers because signs and announcements are also provided in English. Business travellers benefit from the world's fastest train, the Shanghai Maglev, connecting Pudong International Airport to downtown Shanghai.

Are you booking travel to any of the world’s best business destinations? Download our booking checklist so you don’t miss any important steps in the process. 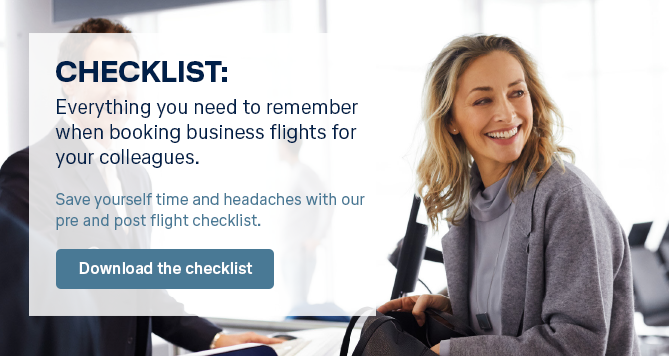